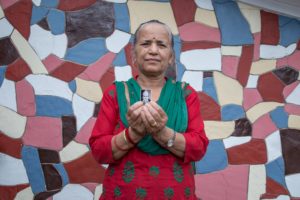 On 21 May 1999, Mr Danda Pani Neupane was arbitrarily deprived of his liberty by Nepalese authorities without any charges brought against him and then subsequently disappered. Mr Neupane has been an active member of the then Communist Party of Nepal-Maoist since the party’s inception in 1985.

In spite relentless efforts to locate Mr Neupane his family has not received any news for 13 years nor thorough and impartial investigation regarding the circumstances of his enforced disappearance. To date no trace of Mr Neupane’s whereabouts exist. His wife Mrs Shanta Neupane and his daughter Ms Nisha Neupane were extremely and directly involved in the search of their husband and father by regularly visiting police statins and jails in the Kathmandu area.

To date the rights of Mrs Neupane and her daughter, to know the truth about the circumstances of Mr Neupane’s enforced disappearance, his fate and whereabouts but also the progress and results of the investigation have been constantly violated by the Nepalese authorities.

Having failed to locate her husband, Mrs Neupane filed two habeas corpus writ to the Supreme Court on respectively 26 May 1999 and 17 August 1999 which were both quashed.

The family went through a number of non-legal measures in order to uncover information on the situation of Mr Neupane. Mrs Neupane submitted a written appeal to the Parliament on 20 June 1999. However, apart from minimal interim compensation of NRs. 100,000 (890 Euros) received in 2008, Mrs Neupane did not received any truth or justice nor adequate reparations from the government of Nepal for the enforced disappearance of her husband.

In May 2012, represented by TRIAL, Mrs Shanta Neupane and her daughter submitted an individual communication to the Human Rights Committee.

In July 2017, the Human Rights Committee issued a decision on the communication finding Nepal responsible for the violation of the right to life, the prohibition of torture and the right to personal liberty.